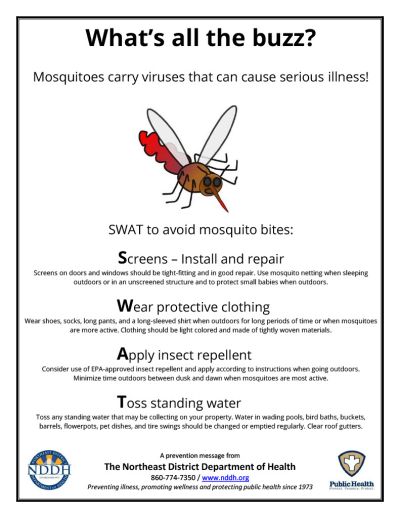 “We are seeing a sharp rise in the numbers of mosquitoes carrying West Nile virus, especially in coastal Fairfield and New Haven counties and in the metropolitan Hartford area,” said Dr. Philip Armstrong, Medical Entomologist at the CAES. “We anticipate further geographic spread and build-up of West Nile virus in mosquitoes, with increased risk of human infection, from now through September.”

With the identification of West Nile Virus-positive mosquitoes in northeast CT, the Northeast District Department of Health (NDDH) is reminding residents to take steps to avoid being bitten by mosquitoes. “West Nile virus is the most common mosquito-borne disease in the United States and reemerges every summer in Connecticut, so this news was expected,” said NDDH Director of Health Susan Starkey. “WNV can cause severe disease in humans. To help residents lower their risk of acquiring mosquito-borne illnesses, NDDH developed the SWAT campaign that offers tips to avoid being bitten.”

Union was the last town to be settled east of the Connecticut River, largely because of its rough terrain and poor soil. In 1633, John Oldham, an adventurer from Massachusetts, obtained specimens of black lead or graphite from the Indians. During the Revolutionary War Governor Trumbull tapped this valuable resource for use at cannon foundries. On July 1, 1720 the General Assembly sold 12,500 acres to 12 proprietors for 307 pounds, comprising the area that is now Union.

A Your Page Today LLC Production